To my surprise our group retired to their seats to sleep early (The cabins were the domain of the more conventional tourists partaking in commercial tours). I have to admit that I was a tad disappointed: my excitement could have sustained me for longer. However the peace was shattered at about 3am by the arrival of the remaining 19 adventurers at The Pas, along with enough of Chuck's home produced food to feed an army. I am sure that Charles Jonkel, the founder of Great Bear Foundation would not mind me saying that he resembles a bear. He is one of a kind, an immensely charismatic and irrepressible 80 year old who has lived and breathed bears all of his life. His sincerity shines through and even in the early hours of the morning, he started narrating the dark scenery, such is his desire to impart his knowledge in others.


I woke unexpectedly late, 8:00, and took a very adequate breakfast with Josette, a BC resident of French descent (hence her difficulty with the quality of Via Rail's relatively decent food). She has an enlightening sense of history of Canada. It's worth remarking upon the scenery; some may find it monotonous and flat; however as a European the sheer scale was aware inspiring. The morning offered a chance to speak to Shannon about bears; I couldn't help but think how lucky she is to devote her life to their conservation and education. She has a lovely, gentle disposition, and had already shown real kindness to me in inviting me on the trip and answering numerous queries in the build up. I admire her ability to live according to her ideals through her work, and to have put her principles ahead of material considerations. I felt upbeat about life and had temporarily been able to leave behind my disappointments and insecurities.


The atmosphere on the train changed somewhat after a shop just before lunch, when a large group of native people boarded the train. I realised what a lifeline this biweekly service must be in an area with no roads between settlements. Sadly there was little interaction with our group. However passing through the Canadian Shield we spotted a bald eagle on a tree by a lake. I started to think about how lonely I would feel when I had to leave the group in a week's time to go back to England. The cold caught me by surprise at a brief stop in Thompson, and led me to suspect that the temperature in Churchill may be a shock to my system. Chuck took the opportunity to show us an ant nest- a food source for bears. Latter, Alan tool the time to show me some of his amazing photos- making me wish to explore more of the US. I appreciate him, like Heather, making the effort to speak to me and after dinner the evening flew by- one of the real benefits of the course is the opportunity to mix with fascinating individuals whom I would never had met in real life. 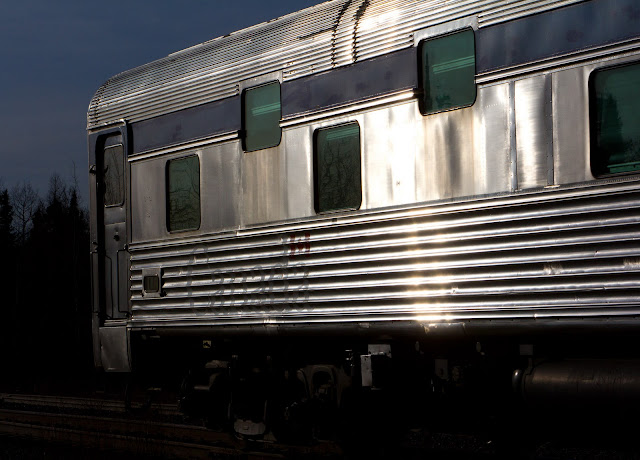 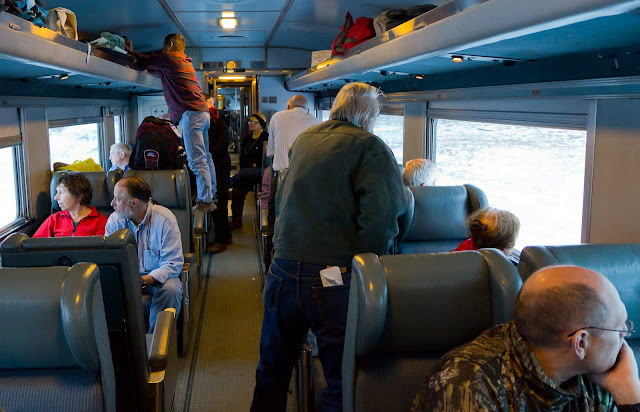 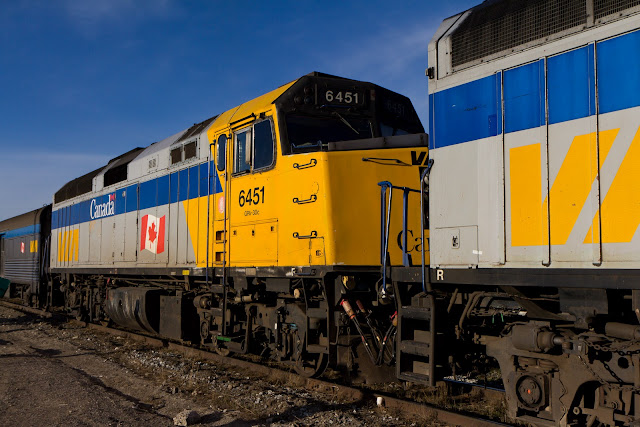 Two engines are taken to Churchill as it's a long way to go back if one fails
Posted by Jeremy at 03:49