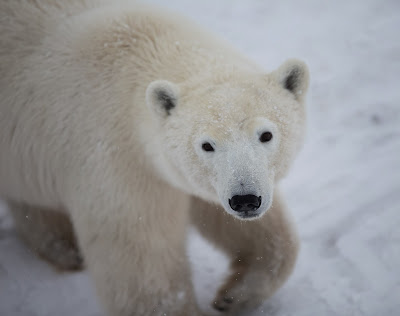 The majority of tourists visiting Churchill do so on commercial package tours, and view bears from specialised vehicles called tundra buggies. However, the Great Bear Foundation with whom I have travelled for the last four years take a significantly different approach, believing in wider access to the north (other trips are extremely pricey), and provide a wider cultural context including an exploration of the native culture. Their approach to viewing bears is also distinctive, as they use a school bus to explore the road system, instead of heading off onto the tundra towards Cape Churchill. The motivation for this, besides cost, is to avoid the ecological impact of industrialised tourism, and to ensure that any profit is used to aid bear conservation rather than going south to Winnipeg to large tour companies. 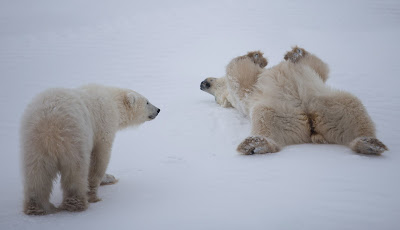 My personal experience of tundra buggies is mixed: when I went on one in 2010 I was so disturbed that I wrote letters of complaint to Manitoba conservation and other organisations. However, today and in 2012 I was lucky enough to have a local driver Kevin with 28 years’ experience. He is passionate about conservation and concerned about the bears’ welfare. He ensured that the vehicle remained on designated trails, that windows were shut at meal time (in order to avoid food conditioning), and was extremely firm with a tourist who tried to bring their lunch onto the outside deck of the buggy. Kevin shared his knowledge working in the High Arctic as a biologist’s assistant, so the experience was focused on education rather than entertainment. He also expressed passionate views about the impact of global warming on the North and his views about hunting, subjects to which I will return later in this blog. 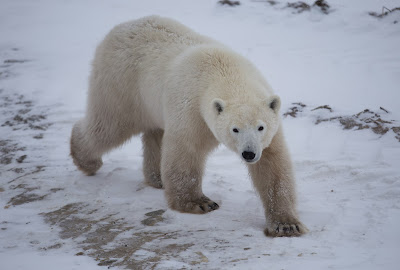 However, this does not address the wider issues about tundra buggies, specifically that they large fossil fuel powered vehicles which are contributing to the grave threat to polar bears from climate change. Furthermore, I’m do not have enough evidence to say which of my experiences was representative.  I can say in general terms that if you’re a keen photographer, a buggy tour may offer you some more sustained chances to compose pictures than from the road system, but with nature there’s always a strong element of chance. Today, the bear viewing on the buggy was relatively limited, whilst the remainder of the group had a very fulfilling experience near the town of Churchill, saving $400 and avoiding issues of conscience. 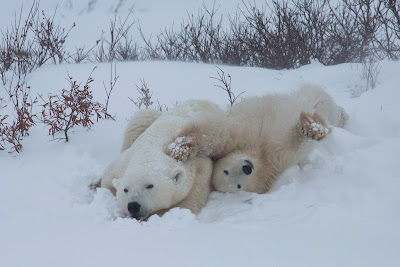 I did however have the delight of seeing a two year old bear break off a willow branch and then play for it for an hour. We were told that the bears had exhibited little play fighting behaviour this year (where younger bears spar in order to practice for territorial battles out on the ice). Our buggy driver attributed this to the relatively warm temperatures, this year which have meant that the bears have had less energy to expend on play. He explained that this season had been unpredictable and atypical in a number of aspects. Unfortunately from a photographer's perspective, today the light was flat and lacking contrast. 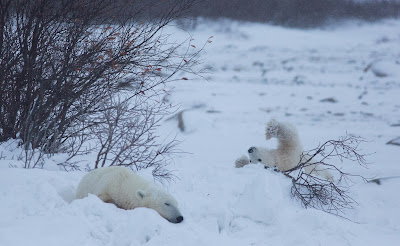 I’d also like to return to a subject I explored on this blog in 2010: the controversy around Brian Ladoon’s dogs. This charismatic but misguided Churchill local is once again this year advertising tours to see his Eskimo dogs ‘playing’ with polar bears, and had two young dogs tied up outside at a gift shop in town to draw in tourists. However, this is far from natural behaviour: Brian overfeeds his dogs in order to attract dogs to create a spectacle for tourists.  This is extremely damaging, since once bears associate humans with a food source, they typically become involved in conflict and end up either in Churchill’s Polar Bear Jail, or worse being shot. Newspaper articles and television documentaries in the UK or elsewhere have portrayed this conflict out of context as cute, yet failing to mention that a number of dogs have been killed in fights with bears. There is nothing natural in this cynical exploitation of wildlife for commercial gain. I’m pleased to say that I talked a couple on the tundra buggy today out of taking Ladoon’s tour. 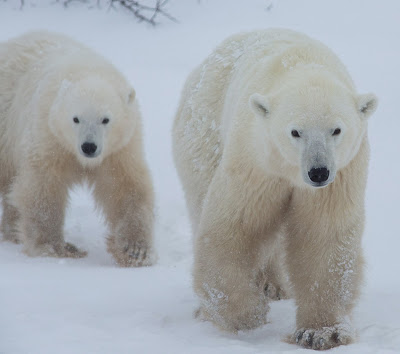 In the evening, we had a thought provoking presentation about the Sayisti-Dene tribe, a people displaced, destroyed, degraded and almost destroyed by the Canadian government's policy to separate them from their land and livelihood. In this shameful episode in Churchill's history, they were duped into abandoning their sustainable existence based on Caribou. In 1953 the Government falsely claimed that they were depleting the herd and they were moved to North River near Churchill which lacked the resources to support the people. Taken away from their traditional way of life, they had to scavenge from the dump to survive and a third of the people died. This was a story not just of material hurt but spiritual harm, and they succumbed to issues with alcohol and delinquency. Finally in 1973 they found a new settlement at Tadoule Lake, but had lost their self sufficiency to the white man's abuse of power. 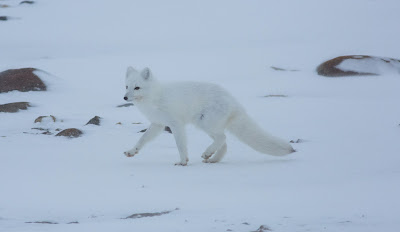 Tomorrow, I will be spending a day driving around the area with a photographer from Alberta, and I'm excited to learn from him, even if I'll miss the exceptionally friendly Great Bear Foundation group.